Cameroonian artists in the United Kingdom are invited to seize the opportunity for cultural collaboration offered by the Commonwealth games 2022 to be held in the city of Birmingham, UK from 28 July 2022 to 8th August 2022. The opportunities range from Media, Food, culinary art and dance amongst many others.

The Cameroon High Commission in London published the below press release. 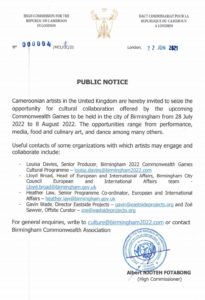 Commonwealth Games 2022 call for collaboration with Cameroonian Artists in the UK.

Useful contacts with which artists may engage and collaborate include:

Read Also: How to apply or renew a Cameroon Passport in the UK in 2021

Where will the Common Wealth Games be in 2022?

Birmingham will be the host city of the 2022 Commonwealth Games after a tumultuous bidding process. The South African city of Durban had been selected as the original host but it was stripped of the Games in March, after failing to meet numerous financial deadlines. Birmingham and Liverpool were both interested in hosting and it became a head-to-head battle between the two but the government preferred the Birmingham bid. After it was eventually deemed “non compliant”, however, the deadline for other cities to apply was extended in an effort to encourage a rival bidder.

The Games will therefore be held in England for the first time since Manchester hosted the multi-sport event in 2002.

What are Common Wealth Games?

UK Scholarship Application. Here are my top tips to help you achieve it